Might there be a third kit coming from the NY Cosmos in 2015? I sure hope so!

Just before Christmas, I took to this site to start to list some item that I would love to receive from the New York Cosmos organization for Christmas. The holidays and several family obligations kept me from following through the complete list and I was unable to list the entire list on a daily basis. Recently however I was able to write a column for First Touch Magazine and I thought it would be a good idea to get my entire “list” printed via their publication. You can view that article by clicking here. Keep on supporting First Touch Magazine as its New York’s only free soccer publication!

The Five Points Supporters section are loyal and passionate about their Cosmos regardless of the final results on the field. In 2014 the supporters groups of the Cosmos traveled to Philly for the US Open Cup, to Ottawa for an away game and some even went to San Antonio for the semifinal playoff match. In 2015, this Cosmos fan would love for the team create a “12th man” t-shirt specifically for the members of the Supporters Groups!

Sure injuries and suspensions are an unavoidable part of the game, but in 2013 it seemed that we were used to seeing the same core of 12-13 players each week, and eventually they gelled and won championship. In 2014, I swear there must have been a different lineup on the pitch every week. Fingers crossed for a core 11 in 2015! 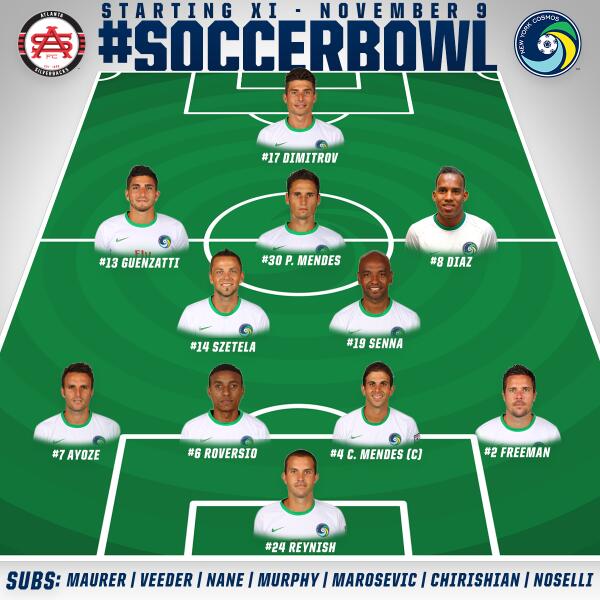 During The Fall of 2013 , the makeup of the starting lineup was pretty consistent week to week.
Photo Credit – NY Cosmos

Almost half as long as the Fall season, there is no question that the NASL Spring season is a sprint. In 2014 the Cosmos had a very good spring season when they tallied 6 wins, 2 losses and a draw. Minnesota United however had a better season as they had 6 wins, 1 loss and two draws. Let’s make sure we go into the summer as Spring champions!

Emirates Air is proudly displayed across the front of the Cosmos kits. Nike and Samuel Adams beer have also been key sponsors since the reboot of the organization. The signing of Raul will surely stir up interest from companies across the globe. Now is the time for the Cosmos to strike some deals with new sponsors that are looking for a global reach and in turn increase the club’s sponsorship revenue!

Fans who attended the August 3rd, 2013 inaugural match against the Ft. Lauderdale Strikers will remember the electric vibe inside of Shuart Stadium with a sold out crowd on hand. Outside of last season’s US Open Cup match against the Red Bulls, that vibe has not been duplicated since. With Raul in the team, attendance will surely be up. Eight home match sell outs would surely help boost the Cosmos on to great things in 2015!

Did I mention that Raul is here now? With the Spanish superstar wearing the #7 shirt, the Cosmos will be looking for their historic signing to help bring them their 7th title.

Raul poses with the banner that was created for him. The theme hopes that #7 will produce the club’s 7th championship.
Photo Credit – Eytan Calderon

As an involved season ticket holder, I can attest that the pre-match tailgate parties arranged by Prost are one of the highlights of any matchday at Hofstra. How about Samuel Adams, or any beer company, offering promotions to the legion of hardcore fans at our Supporters tail gates?

Let’s face it, there is no greater excitement than watching your team bang in a goal or three. Shutouts and one nil wins are all well and good, but to really excite the crowds the Cosmos will have to score goals. Raul, Andres Flores and Mads Stokkelien are all proven scorers. Please sir, can I have some more?

The 3-0 trouncing of the NY/NJ Red Bulls in June was the team’s second win of the US Open Cup following a victory over the Brooklyn Italians. The victory sprung the Cosmos into the 5th round of the Open Cup and pitted them against the Philadelphia Union. Cosmos fans know all too well how this match ended. Multiple occurrences of questionable refereeing led to Philadelphia winning the match 2-1 in overtime. The crushing defeat unfortunately ended the cup run. In 2015, this fan would love to see the Cosmos not only give their fans those same two US Open Cup wins but FOUR MORE WINS as well!

Assuming the same format of play, six total wins would give the Cosmos the Open Cup and would send Cosmos fans into one hell of a euphoric celebration!

Ever since the reboot of the Cosmos in 2013 there have simply been two variations of the kit, that being a home white and an away green kit. In 2015 may be the right time to launch a third kit and give their fans a modern day variation of the team’s glorious jersey.

While One World sports has done well covering the team, it doesn’t quite have the distribution reach that the Cosmos might need going forward. In a market where Red Bull matches have seen coverage via NBC, and where NYCFC will likely gain regular airtime on the YES network, the Cosmos will need to boost their presence on TV to compete in the NYC market.

And A New stadium in Belmont!

There is no question that every Cosmos fan would love to have their very own stadium. Whether all Cosmos fans agree it should be by Belmont is another story, but it’s a proposal that has been out there for well over a year.

Let’s hope that the Empire State Development Committee will approve the club’s proposal for a new stadium soon so that fans can really celebrate the new year with a bang.

Happy New Year! See you at the matches. 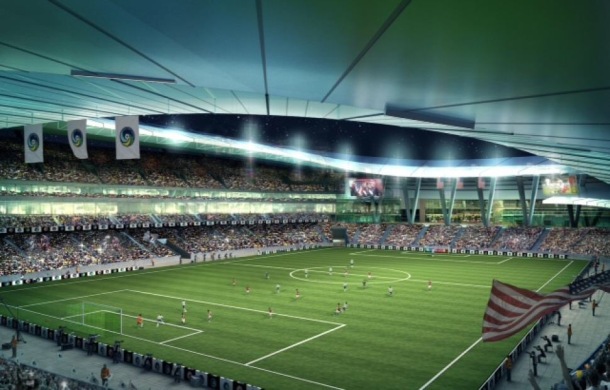 A rendition of the Cosmos proposed stadium that will hopefully be approved at Elmont Crossings.