Cosmos Get Knocked Out By Philly Union & Refs

The scene looked beautiful, but the officiating was anything but that.
Photo Credit – Eytan Calderon

It has taken me a full 24 hours to finally calm down and write what I hope to be, sensible words on Tuesday night’s US Open Cup match. The beautiful thing about me and my blog is as I have said repeatedly, I am not a journalist. I am a Cosmos fan so I don’t have to be objective. So before anyone goes crazy on me here – I’m not trying to be one bit objective in the piece.

I will start by commending a nice group of New York Cosmos faithful for taking the trip down to Philly. The Cross Island Crew, the Borough Boys and La Banda Del Cosmos did what they do best – represent the NY Cosmos to the fullest! Second, I want to thank the New York Cosmos as well for giving this match 110 % which is what all soccer clubs in the United States should do when they participate in the US Open Cup.

Now as for the match itself, for the most part it was a well played match by two sides who were giving it their all. In my opinion, the Cosmos stood toe to toe with the Philadelphia Union. This is now two straight MLS clubs that the Cosmos battled with making NASL look strong in the eyes of the MLS. Both teams battled to a well played scoreless first half. The Cosmos did not produce too much by way of offense in the first half as they couldn’t manage a shot on goal in the first half. However in the second half, after some nifty passing around the pitch which started by a steal from Sebastian Guenzatti, Danny Szetela would send one last pass into Alessandro Noselli just inside the penalty box where he would send a shot that beat the Union goalie to give the Cosmos a 1-0 advantage. The goal came in the 55th minute of the match

The Philadelphia Union would tie the match about a minute later. I have to tip my cap to them on their goal, they clearly got past our defense with almost no issues. Roversio left his feet as he tried to steal the ball away but it resulted in a nice cross into the box where Sebastian Letoux beat out Carlos Mendes for the ball and it resulted in the equalizer

From the 57th minute onward, it was a back and forth battle with both sides seeing opportunities come and go. Towards the late stages of the second half, I could see the Cosmos losing a few steps. Perhaps getting a bit fatigued out on the pitch. What might have been wearing on them was the awful officiating. Several times we saw fouls on Cosmos players not being called with the biggest one being on Mads Stokkelien as he freed himself on a breakaway towards the goal. It was clear as day that he was fouled in the box and should have been awarded a penalty kick. That never happened. A penalty however was later given to Phladelphia for a supposed Jimmy Ockford take down. I still haven’t seen the penalty occur.
The remainder of the match does not deserve words – it deserves to be seen and commented on by each person.
So I ask you to watch the footage and tell me what you think?

I’ve note the key moments of the match below. Give me your thoughts! 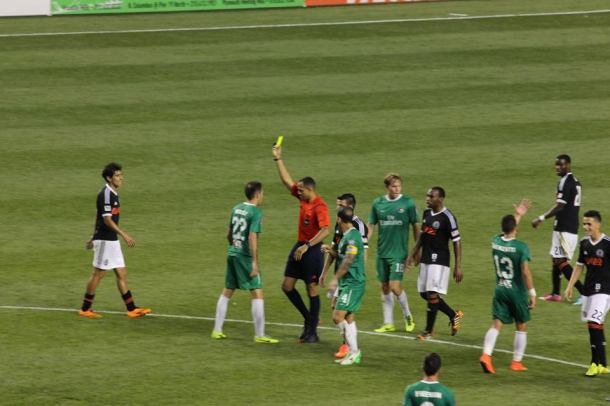 Saw this sight a little ore than we wanted to on Tuesday night!
Photo Credit – Eytan Caldeon

« Cosmos Vs Philadelphia Union – Fifth around Preview!
NASL Making “Homes” A Priority, What Will Cosmos Do? »