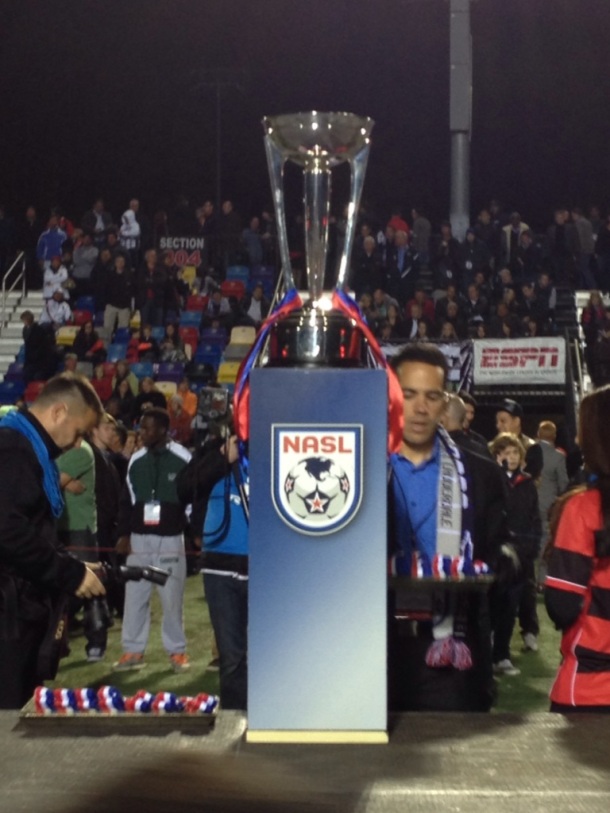 To get back to to this place, the Cosmos cannot lose focus on the NASL season!
Photo Credit – Cesar Trelles

I can’t help but think about all of the New York Cosmos news that has come out over the last couple of weeks around the US Open Cup. Its so easy to get wrapped up in that hype and excitement and think about the possibilities of success in the US Open Cup. However, Cosmos Country must be prudent in corralling their emotions and focusing on the immediate task at hand.

Still sitting in third place in the spring NASL championship hunt, the Cosmos face the Tampa Bay Rowdies today in what is sure to be a another classic chapter in these two teams storied rivalry. The Rowdies sit in sixth place tied with the Atlanta Silverbacks. The Rowdies are coming off of a 1-1 tie with the Ottawa Fury and are looking to make their way up the NASL table and would love to do it against the Cosmos. The Cosmos are coming off of a key victory against Minnesota United FC at home this past Monday and would like to keep the momentum going with a win in Tampa Bay. The Cosmos will be keeping a close eye on one match this week as well. The two teams in front of the Cosmos, Minnesota United FC and the Fort Lauderdale Strikers, will be playing each other today in Minnesota. A tie in this match would serve the Cosmos well.

For the Cosmos, they should have Sebastian Guenzatti back in the lineup after he served a one game suspension due to a red card against the Carolina Railhawks two weeks ago. Unfortunately for them, they will be without the services of Diomar Diaz who did not make the trip to Tampa Bay due to a hamstring injury. The Cosmos will have to play their usual defense once again as Tampa Bay will be sure to come out and try to get a quick goal. While Jimmy Maurer was not tested too often on Monday against Minnesota (only had to make two saves), he hopes that the defense can continue to keep Tampa Bay off the scoreboard as the team has struggled to score so far this season (only 5 goals). 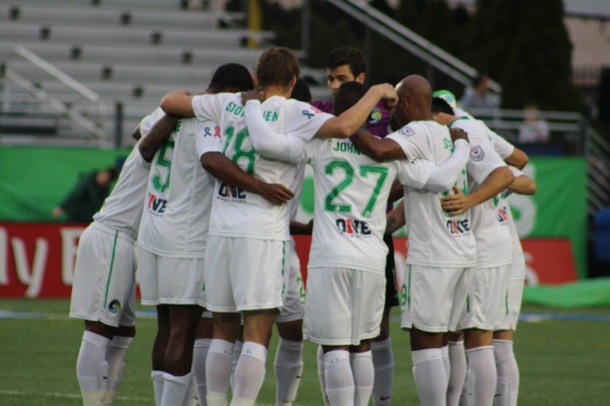 Offensively the Cosmos must continue to find new ways to score. They will have the scoring options that they need up front and just maybe, we might see Hans Denissen today as well. If the Cosmos intend to make a run at this NASL spring title, they must win today’s game. Part of the way to do that is to ramp up their goal scoring. If you exclude the home opener where the Cosmos won 4-0, the Cosmos have only scored two goals in their last four matches. Let’s hope that the forwards will start to find the back of the net soon and that the offense begins to find a rhythm that produces wins.

For Cosmos fans in Long Island, you can catch the match today at our usual location, Prost Grill & Garten

Here is the rest of the action around the NASL in week 6 – all matches will be taking place today, Saturday May 17th:
7:30pm – Carolina Railhawks vs Atlanta Silverbacks (in Carolina)
7:30pm – Indy Eleven vs Ottawa Fury (in Indianapolis)
8:00pm – Minnesota United FC vs Ft. Lauderdale Strikers (in Minnesota)
8:30pm- San Antonio Scorpions vs FC Edmonton (in San Antonio)

So Cosmos Country for today, lets keep our focus off of the world cup. Lets ignore the garbage that NYCFC and Red Bulls supporters are spewing. Our boys are chasing a title and they mean business! So should we! Lets go Cosmos!

« A New Perspective On Cosmos!
The Cosmos Draw A Lucky 13! »