Saturday’s Victory – From The Fan’s Perspective

The weather changes, the month changes, but one thing that remains constant is who stands in first place atop of the NASL. Yes, its been well documented by now that the NY Cosmos won yet again on Saturday in their dismantling of the Carolina Railhawks. If you were not in attendance on Saturday by all means you did your share of chest pounding if you watched the match on TV or even if you just saw the final score. But the folks I was with on Saturday did more than chest pounding. I like to leave the professional photos of the action to the bigger sites for now. In the interim, here are shots from around the stadium from this fan’s perspective.

For me the night started in the parking lot of Schuart Stadium thanks to the kindness of the Cosmos supporters group the Borough Boys.

We had a very family friendly tail gate before the game with lots of food and drink with tales of optimism going into yet another beautiful Saturday Night:

Tail-gate before the game! 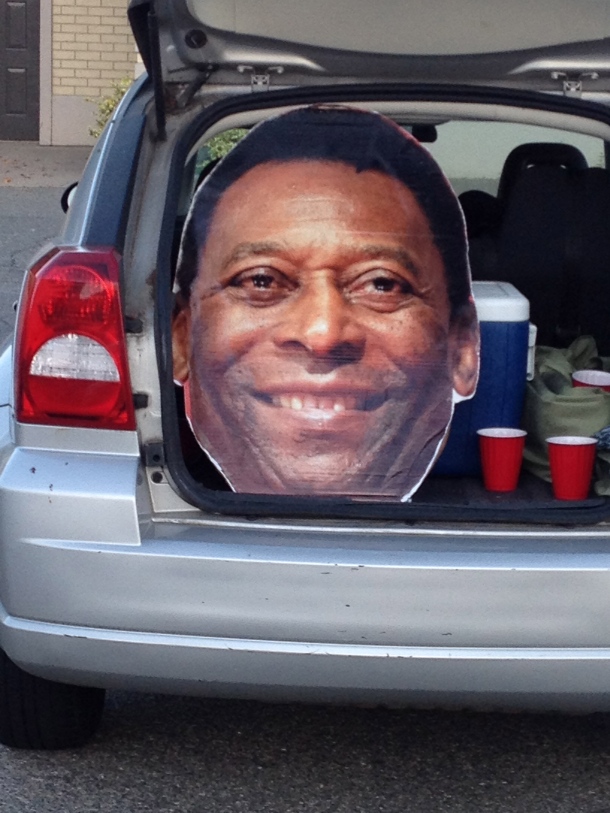 Pele’s Head Tailgating Before The Match!

Once the food and drink were consumed it was time to make out way into the stadium for what we were hoping would be yet another Cosmos victory. On the way in I ran into some of the Cosmos Girls, one of which I had the pleasure of meeting last week at one of the viewing parties. Katrina remembered me and was happy to see me and she talked the rest of her Cosmos Girls dancers to pose for a quick picture just before game time! 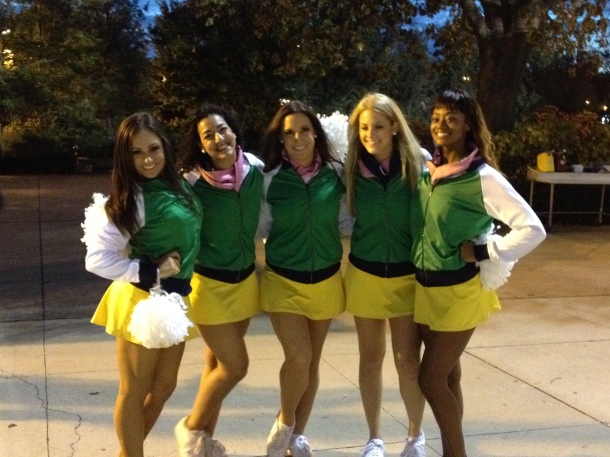 As I was saying good-bye to the Cosmos Girls the rhythmic pounding of drums could be heard getting more distinct in the distance. That sounds could only be one thing to Cosmos Fans, the arrival of “La Banda Del Cosmos”

With “La Banda” now in place, I took a look at the beauty that was the five points setting up. As the supporters group was trickling in, I took a couple of minutes to stop and admire the beauty that is the signage of all the supporters groups. The Five Points are truly a special place. This week there was a new sign that read ” Watching Our Team”, a nice little tribute to those that choose to walk out on ti,e their team! 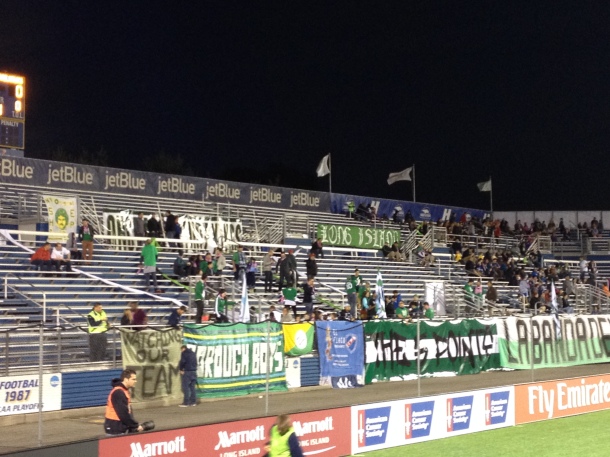 The Five Points Set Up & Ready For The Match

There is no better rush for the Cosmos Fan than to hear the ceremonial music that plays when the teams walk out on the field. Like gladiators about to do battle, the two teams march out each week ready to put it all on the line but always manage to take time to add a softer touch in taking to the field with children. As I said before, I leave the pro looking pics to the bigger sites, so pardon the appearance of the fuzziness. 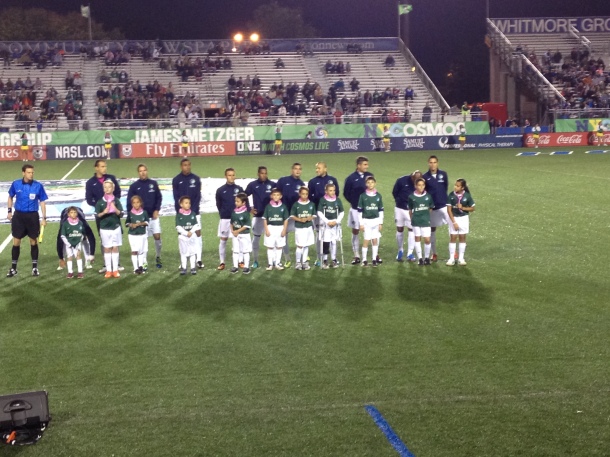 New York Cosmos Line Up With The Youth Before The Match

With everything in place, it was time to finally get down to business. We wanted this match just a little bit more this time since Carolina was the only team that had handed us a loss so far this year and it was an ugly 3-0 one to boot! The team wasted very little time getting to work as Danny Szetela reached the back off of the net on what was deflection that seemed difficult to answer however still handled by Szetela.

With the team up 1-0 the Five Points wasted no time in getting the noise levels up. As always La Banda would lead the way with the festive noise.

The Cosmos would take a 1-0 lead into half time. In looking around at the crowd at the half I noticed that our resident celebrity Pele, was no longer alone. Seems as if word is getting out about these Cosmos and other legends want to catch a glimpse of this team! 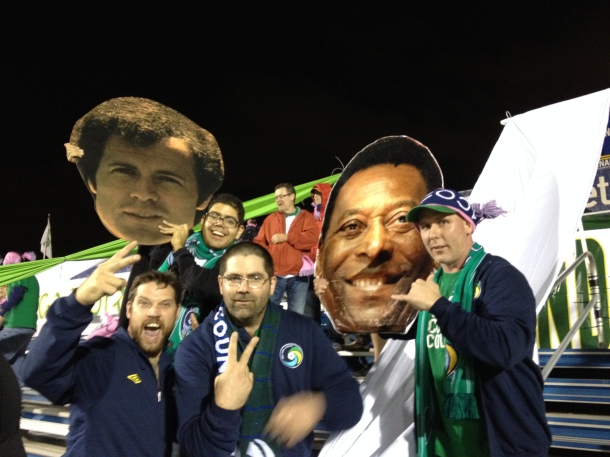 Pele Has A Friend In The Five Points Section Now!

Once the second half began the Cosmos would assert the pressure that they applied in the first half yet again, only this time the pressure was suffocating. Diomar Diaz would add yet another goal to his already brilliant season when he beat out two Carolina defenders for a cross that he would strike into the top of the net for the second gol of the match for the Cosmos. The goal was characteristic of this Cosmos team as it just seemed that Diaz wanted this ball just a bit more than the 2 Railhawks defenders. 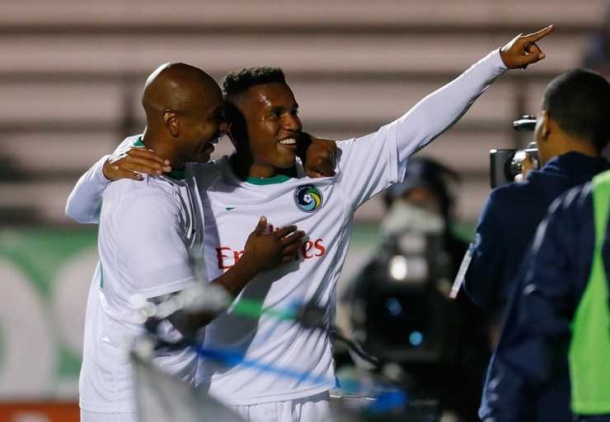 Diomar Diaz celebrates after his 5th goal of the year.
(Photo courtesy of NYcosmos.com)

With the Cosmos up 2-0 the crowd started to sense victory. I mean if you were at the top of the table, at home and winning 2-0 wouldn’t you?

Marcos Senna would add the 3rd goal for the Cosmos on a penalty kick which came about due to Alessando Noselli’s assertiveness into the penalty area after just entering the game. Senna would have to take the PK twice due to encroachment the first time he took the shot. It didn’t really matter as he would hit the PK both times only to the frustration of the Railhawks goalie who kicked the ball past midfield after Senna scored. Say what you want about Senna’s style of penalty kicks, which resembles a stutter-kick, but he is pretty much a sure shot when called upon to take them for the Cosmos.

Finally Noselli would hit the fourth goal for the Cosmos on a brilliant strike from about 15 yards out that found the top right side of the net to give the Cosmos a dominant 4-0 lead. The goal which came in the 90th minute, was Noselli’s second goal of the year. His first goal Cosmos fans are likely to remember as it was the game winning goal in the season opener against the Ft. Lauderdale Strikers.

The final score was a justifiable score for this Cosmos fan as not only did we return the favor to the Railhawks for the loss they handed us, but we did them one better by beating them 4-0! Man did that score board look good!

Dominance Of The Railhawks – Still Top Of The Table

Finally in what is becoming a popular tradition at Schuart Stadium, the Cosmos would come over to the Five Points right after the final whistle to thank the Five Points for their support. This time the exchange was a little bit longer and it seemed like they came a little bit closer too. And why not, this fan hopes that they love us just as much as we love them. Danny Szetela sure as hell does. He would take the “show of thanks” just a little bit further as he came off the field all together and walked right up to the points to not only hi-five some of the members of the Five Points but he also gave away his shin guards as souvenirs to some lucky fans. I hope this becomes a tradition too in the future of Cosmos home games.

Danny Szetela Leaves The Field To Thank The 5 Points!

Another win for the ‘Mos! One more win and the team is headed to Atlanta for the NASL soccer bowl. Who would’ve thought in this first season back, that the Cosmos after having the team play together for such a short period of time, would be as dominant as they are? I didn’t but I am sure as hell glad that they are! Next match is next Sunday, at home, against Edmonton. Get the champagne ready!

« The Weekday Cosmos Chatter
Your New York Cosmos – By The Numbers! »