One of the beautiful things about being a Cosmos fan is getting to attend the home games at Hofstra’s Schuart Stadium. Since August, I have been fortunate enough to attend all of the home games either with my family or simply by myself. Regardless of whether I actually go with my family or by myself, I can say that I have never really sat alone at these games. The supporters section of the stadium known as “The 5 Points” has been my home away from home when watching Cosmos games.

From the first time I decided to walk over there and sit, they welcomed me with open arms. What is even more inviting about them is the diversity of the supporters section. One would think that sitting in a supporters section at a soccer match they would find themselves confronted with rowdy fans drinking beer and using foul language as well as other obscenities. Thankfully, I can tell you with great confidence, that this is not the case in the 5 Points. Sure you will find passionate young and older adult fans. But I find comfort that I can bring my children to this section and have them learn what its like to be a true fan while sitting with other children as well. At Cosmos home games, we have an opportunity to teach them what its like to cheer passionately for their team without the negativity that is exhibited in some stadiums around the country.

By now some of you might be saying, why is he writing about this? Its been widely documented throughout various Cosmos websites and blogs that the “5 points” has a strong sense of community. While this stands true, recently the North American Soccer League (“NASL”) has been taking on negative publicity with respect to security measures. At the forefront of these arguments has been Schuart Stadium’s security, the home of our Cosmos. For those who weren’t aware, there was an unfortunate incident back on Sunday September 29 during the Cosmos home game against the Rowdies. Several supporters of the Rowdies made the trip to New York for the game and there were accusations by those supporters that their supporter scarves were stolen by Cosmos fans. This in turn also led to some of the Rowdies Supporters coming over to the “5 Points” section, where as I have mentioned several children are present, and acting in a manner that can be considered retaliatory. Foul language was used and there was some pushing and shoving. Thankfully, none of this lasted more than 2 minutes and nothing escalated above a couple of pushes and shoves.

In the days and now weeks that have followed that incident I have heard several groups take to the internet to give the NASL a bad name. Just this morning I read an entry on the World Soccer Talk website that once again was bashing the NASL with security being the key issue. You can view the article here.In looking at what has gone on in the NASL this fall, unfortunately, the incident at Schuart stadium is the only one that I can recall where security could have stepped up more. However when articles start to get posted on blog sites making it seem that there is a bigger problem than there really is, then you have to start wondering what is exactly is behind the bashing? Earlier this week, I took the time to summarize the NASL’s vision in my entry “The NASL Is In Good Handsand while I still think alot of what I wrote may be overly optimistic, at least it is a positive plan and one that should be applauded, not bashed the way the internet would have it these days. That is until you take a look at who is doing the bashing.

The writer of the entry that was posted this morning on WorldSoccerTalk.com used to be an employee of the NASL. How do I know? Let’s just say I have some fellow associates who don’t forget names when they see them. A quick “job well done” to them, they know who they are. It was communicated to me that in an article posted on the web site “Indy Week” back in May of 2013, a number of employees, including the one that wrote today’s article, were relieved of their NASL positions. You can view this article here! After reading this, don’t think I have to say much more as its the simple notion of, “If you had a chance to lash back at your old boss who fired you, would you?”.

Some of the other noise makers that have been rustled up these days happen to be other supporter groups who let’s just face it, don’t like the Cosmos. They will do everything in their power to make the Cosmos organization look bad. I recall back in August during our home opener at Schuart Stadium, a number of Ft. Lauderdale Striker supporters also made the trip to NY back at that game. They were welcomed with open arms by Cosmos fans and the feeling was reciprocated back to us by them. Of course, there was nothing wrong back then because 12,000 people were at that match including supporters from the other team and not a single problem was had. It was a “kum-ba-ya moment” as some have called it. Add to the fact that the Cosmos would struggle to move up the NASL standings for the next couple of weeks and the Cosmos were barely whispered throughout the league. Today, they sit at the top of the table and the critics have all of a sudden come out in force and at the same time, they have used the Cosmos as the #1 reason to attack the NASL.

While we cannot do anything about how the league handles its business (although we can support it), I can say that we as fans should just always remember the sense of community that exists at Schuart Stadium and uphold it to the best of our ability. I welcome the supporters groups of other teams with open arms. Its a beautiful thing to see fans follow their teams around the country. Heck, I hope to be able to do it with fellow Cosmos Fans in other cities in the seasons to come. But before we are quick to judge the negativity that will undoubtedly flow from other fans in the league just remember, there is no problem with Cosmos Country at home if we keep doing what we’re doing. Keep bringing the kids and the swarms of youth soccer leagues. Keep the chants and rally cries clean and free of profanity. While a cold beer might be nice on game day, keep it outside of the stadium and to a responsible level. In my life time I cannot remember a better sporting environment for a family. Also if by some reason, we are confronted by fans of the opposing team with violence or any behavior that is not that of our community – lets just let stadium security take over.

I hope that the family vibe continues and I hope that each of the Cosmos fans that are reading this shares the same view.

And to those out there who will continue to throw negative jabs at the Cosmos, don’t do it with words and false accusations. Beat our team on the field, or at least try to! 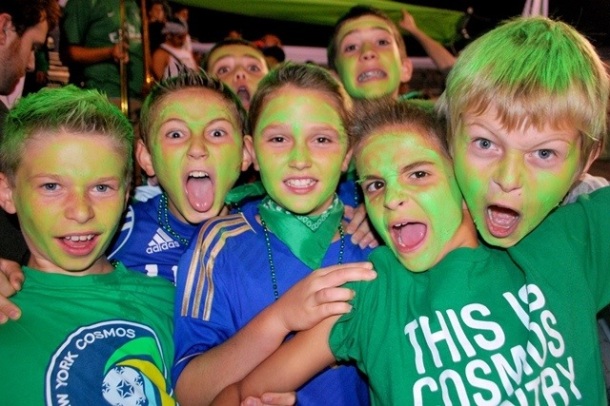 « The COSMOS are what NEW YORK needs now!
Looking Ahead – Carolina Railhawks at NY Cosmos This Saturday 10/12! »