Your NY Cosmos By The Numbers!

The goals are starting to come for the New York Cosmos and it begs the question – who’s doing the scoring for the team? The answer to those questions as well as some other interesting stats will be updated from time to time on our site. Enjoy and if you want to know some other stats, fire your requests away!
NY Cosmos Scoring Leaders -Fall 2013 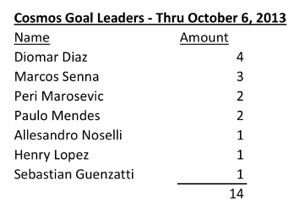 FOUR
On Saturday, Kyle Reynish scored his 4th clean sheet of the year for the NY Cosmos. With 10 games recorded, a 40% clean sheet rate is pretty respectable around the league!

FIRST
Saturday night marked the first appearance this season for Dane Murphy when he came into the game in the second half during stoppage time. He replaced Marco Senna who had a first of his own. Senna coming out of the game marked the first time all season where he was not on the pitch for the boys in green.

TOPS
The announced attendance at Saturday’s match was 3,629. The Cosmos are now averaging 6,257 for all of their games both home and away. Their home average is much better at a very respectable 7,396 – tops in the NASL this season!

« Another Win – Another Step Closer To Atlanta!
Monday Blues? Turn Them Green With These! »